Sharing Fame with the Vicar of Dibley! 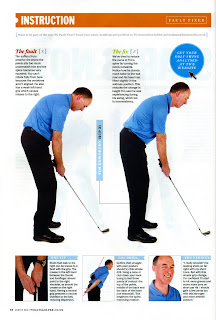 OK. So I’m not at woman! I’m 6”4 rather than 5” nothing. I’m not a vicar but a Baptist minister. But like Geraldine Granger, I am a media star!

Yes, reader, the whole of page 98 of the April edition of Today’s Golfer is devoted to me! Actually, I’ve only just found out it was in there, but the photo is the evidence. Back in January, I responded to an offer which came via my golf club to a golfing clinic at Today’s golfer, which just happens to be in the city where I live and about two minutes from my home. Basically, I got a free half-hour lesson, picked up some useful tips from an ‘elite’ golf coach, and was photographed for the magazine. As if that wasn’t enough, my media career has continued. Singing with Lesley Garrett in July, and recording some jingles for TalkSport with the Male Voice Choir in August.

I remember Geraldine becoming rather too full of herself after her radio career took off. That’s unlikely to happen to me – unless, of course, Songs of Praise comes calling!