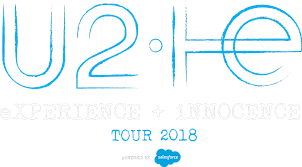 I am one of 10000 or so who can say, ‘I was there!’  I was there when an up and coming Irish band named U2 made an impromptu appearance on the main stage at the Greenbelt Festival in August 1981.  As I recall, they had travelled down from the north-east to perform, using borrowed instruments, before returning there for a concert later that evening.  At the time, they were beginning to break through and to be seen as the latest ‘Christian’ band.  The lead singer did nothing to refute that as he told the crowd, ‘We’ve come because we felt the Lord was telling us to.’  Six years later, U2 would be the biggest rock band in the world.

Bono, Edge, Adam Clayton, Larry Mullen Junior.  These are names known to many, the band line-up at their first gig in late 1976, and still together 42 years later.  Arguably, U2 is still the biggest and best band in the world, with sales approaching 200 million albums.  Unlike certain bands that endure as a tribute act to themselves (for example, the Rolling Stones), U2 continues to reinvent their music and to have things to say.

What are the factors that have contributed to the success and influence of U2?  I am currently part way through some sabbatical reading on the band, but these are some brief thoughts thus far:

1.     Time and place.  The band members met at Mount Temple School in Dublin.  Neil McCormick, a journalist and contemporary at the school, suggests that 1970’s Dublin was a city that lacked exposure to the wider world. This meant that U2 did not have many examples to follow, good or bad.  They could create in their own way.
2.    The school itself.  Mount Temple was unique in Ireland as a non-denominational school.  It encouraged freedom of thought and expression.  Bono (Paul Hewson) formed a childhood gang called Lypton Village, that gave him his nickname and allowed him space to develop an identity in what was very much a creative community.  Not only did it contribute to the formation of U2, but also the less-heralded and experimental band, the Virgin Prunes.  Dik Evans, brother of the Edge, was a founder member, along with Gavin Friday and Guggi (their Lypton Village names).
3.    Loss. Tragically, Bono’s mother died when he was only 14.  She collapsed at the funeral of her father, having suffered a brain haemorrhage, and never recovered.  This loss is often referenced in Bono’s lyrics (he is the primary lyricist for U2), from  the early hit ‘I will follow’ (‘The boy tries hard to be a man, his mother takes him by the hand’) to ‘Iris’ (on ‘Songs of Innocence’).  It fuels the rage that he sometimes feels at the world.  Larry Mullen, the band’s drummer, also lost his mother in a road traffic accident, when he was almost 17, having also lost his oldest sister in 1973.
4.    Christian faith. Bono, Edge and Larry have all embraced a Christian faith from teenage years.  Adam has tended to follow a more ‘rock and roll’ path!  Mount Temple underwent something of a religious revival for a time with many pupils making commitments to Christ.  The three Christian members of U2 became part of a Charismatic church called the Shalom Fellowship, which was a huge influence in their faith development.
5.    Leaving the Shalom Fellowship.  As the band gained some success, they came under pressure to give it up for the Lord. Apparently, there was a prophetic word from a member of the fellowship that they do so, and for about two weeks, Edge left the band.  He returned having decided that their music and their faith was compatible.  The band members gradually loosened ties to the fellowship and pursued their faith in other ways.
6.    Success in America.  Even before their career began to flourish in the British Isles, U2 sought to ‘break’ America.  That the strategy was spectacularly successful can be seen the sale of over 10 million copies of the 1987 album, the Joshua Tree, in the US alone.  That success continues to this day.
7.    A commitment to social activism.  In 1988, Bono said: ‘To me, faith in Jesus Christ that is not aligned to social justice – that is not aligned with the poor – it’s nothing’ (quoted by Steve Stockman p 53, in his book ‘Walk On’).  That commitment is exemplified in his work for Amnesty International, persuasion of world leaders to ‘Drop the Debt’ in developing world countries, and the fight against AIDS.

You may already have stopped reading.  I’ll stop here for now!