Secularism and the King James Bible 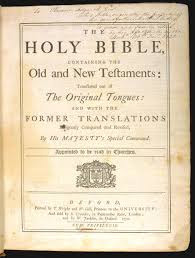 Three cheers for BBC Radio 4, who next month will be broadcasting a day of readings from the King James Bible, in celebration of the 400th Anniversary of its publication. No cheers to the National Secular Society who are claiming that the 16 hours or so that will be given to the event are disproportionate to the number of practising Christians in the UK.

The latter may or may not be true. Christians would often claim that the place of the Christian faith is not given great enough prominence on our airwaves, particularly when it has shaped so much in our nation. Yet every time a religious broadcast is planned, it seems that one man is given a disproportionate number of inches in our press. That man is Terry Sanderson of the National Secular Society. I am not sure I have ever read of him saying anything positive about any religion, ever! Nor do I believe I have heard of him saying positive things about secularism. There lies the big weakness of the secularist agenda. It hangs on the condemnation of every idea with which it does not agree. It does not promote a better way of finding a moral compass in life, but is defined by that in which it does not believe.

What Wesley didn't say about sermons!

Last week, I threw out a load of my old sermons and I thought back to John Wesley’s oft-quoted comment about getting rid of his sermons after seven years as surely he could preach better ones by now. Except that it turns out Wesley did not say it! Here’s the entry in his journal of 1778, which must be one of the most misquoted of all time!

Not being an avid reader of Wesley’s sermons, I really cannot comment on whether he might have done better with the examples that he mentions. There is, though, a clear implication that he repeated sermons previously preached and was satisfied with the doctrine he presented therein. It gets me wondering who was right – the man who destroyed his sermons every seven years, or Wesley who did not? Can we preachers be content (I recognize that not all of my potential readers are preachers, but many are) with re-using old sermons (or classic sermons, as I like to call them!), or should we do better?

As I looked back through some of the old sermons, I had different reactions. How did I preach that?! That was good, but it was for a particular time. That was great (occasionally!) and is relevant for any time, any place, anywhere! That was OK, but I could do better.

Let me come clean: I have revisited old sermons for use in different places. As a wise church secretary used to say, at a church I visited often as a lay preacher, ‘If it’s God’s Word, it’s worth saying again.’ I have to say, though, that it needs to speak to me again before I can preach it to others. Also, I doubt that it is really the same sermon when preached again. You see, I do have to adapt it to reflect changes in my thinking, and to update it to acknowledge changes in the world. And hopefully, it is better at the second time of preaching than the first.

A few words of warning. It does not do to repeat the same sermon at the same place it was originally preached. Someone always remembers! My father, who was pastor at the same church for 27 years, once tried it after a time lapse of ten or more years and yes, someone remembered!

PS I confess: the paper copies of the old sermons were thrown out, but I have retained the electronic copies. I doubt that I’ll use them again.