Hospitality on the Camino

Hospitality on the Camino

Most pilgrims on the Camino stay each night in Albergues. A night’s stay will rarely cost more than 10 Euros, usually between 5-8 Euros in a shared dormitory and sometimes they are donativos i.e. you pay what you can afford. They range from modern purpose-built hostels to obscure side-street rundown dwellings to historic monasteries to ancient chapels.

One such was Ermita de San Nicolas that I stayed in a few nights ago. This was a small 13th Century building, restored and run by the Italian Confraternity of St James. At one end of the single room were the 8 beds , with a further 4 on a mezzanine floor. In the middle was the long table around which we pilgrims ate our meals. At the far end was a small open chapel. The building had no electricity, so both dinner and breakfast were by candlelight.  Before dinner, we were invited to have our feet washed as a re-enactment of  Christ washing the disciples’ feet. We prayed the Lord’s Prayer together in our own languages. Dressed in a kind of knights’ tabard, with scallop shops hanging over the front, one of the hospitaleros washed one foot, while the next one dried and kissed it! Each one of us had a prayer prayed over us that we would safely reach Santiago. Then we were served dinner – simple fare but lovingly shared.  We sang a few impromptu songs, mainly in Italian. We were taken outside to see the stars, spectacular in an area of little light pollution. It was a truly special evening as we conversed together in our various languages. In the morning breakfast was served, there was another rendition of the Lord’s prayer, a further prayer for our journey and hugs for each of us as we went on our way.

It leaves me asking, how does my hospitality match up? Will I open up my home to all-comers, especially to those in particular need? Do I bless people as they set out and continue on life’s journey? 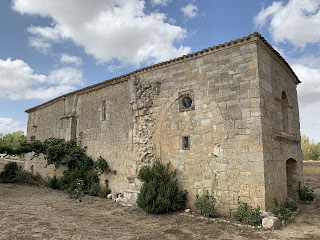 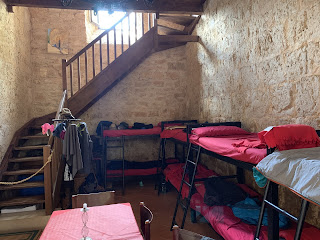