Break down the Walls - a reflection from the Holy Land

This blog was meant to be posted on Wednesday 2nd May 2012, whilst I was in the Holy Land.  However, technical difficulties prevented me, so here it is now. 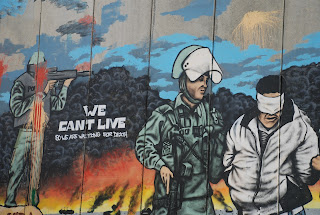 Today has been a challenging day.  We began with a visit to Bethlehem, stopping en route to look at graffiti on the Separation Wall in a Palestinian Refugee Camp. These days, it has more of a permanent feel than the word ' camp' implies, for since 1948 Palestinians have been yearning to return to the land of which they were dispossessed.  Pictures of their various villages adorn the panels of the wall, keeping alive the memory of their homes. Slogans such as the one depicted in this photo express anguish: 'We can't live, therefore we are waiting for death.'

In the afternoon, we visited Yad Vashem, the Holocaust Memorial museum. Here is kept alive the memory of the six million Jews who died at the hands of Nazi Germany. There were harrowing videos of Adolf Hitler stirring up nationalistic fervour, and of Jews sharing the tragic stories of family loved and lost. One part of the display leapt out at me.  In wartime Warsaw, the Jews were herded into a ghetto, contained by a wall.  It was a life of overcrowding, and deprived of the gift of freedom.

To me, there seems to be a supreme irony here.  The Jews, for whom today's state of Israel is a spiritual and political homeland, were contained by a wall.  Today's Israel is containing Palestinians behind a wall and depriving them of basic freedoms.  They seem to have come full circle.  Meanwhile, the Western Wall stands as a symbol of the division between Jew and Muslim, Israeli and Palestinian. 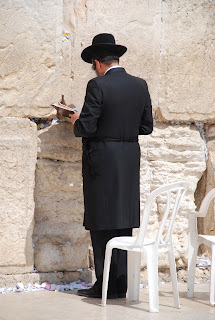 In between those two experiences, we visited the Church of the Holy Nativity in Bethlehem, and the assumed birthplace of Jesus.  It seems simple and simplistic to say it, but in him lies the answer.  Human history demonstrates that building walls to separate communities has never worked, though it may have calmed things down for a time.  The examples of Berlin and Northern Ireland spring to mind.  Paul, in Colossians 2:14' reminds us that Christ Jesus 'is our peace, who has made the two one (I.e. Jew and Gentile) and has destroyed the barrier, the dividing wall of hostility....'. You can read that verse in context for yourself, but basically it is saying that we are all brought into God's household through Christ.

If Christians are to imitate Christ, then I am convinced we must work to break down walls wherever we find them.  How that is to happen in Israel, God only knows, but history shows that it is possible.

Strangely, as I began to write this blog, a song called 'Break down the Walls' began to play on my iPad.  'Break down the walls that I have built keeping you distant' goes the song. 'Break down the walls around my heart, make me real.' Poignant words at the end of a day in which I have wept inside for those who lack the freedom that I take for granted.  Perhaps God is reminding me not to judge others, before I have examined my own heart?
Posted by A Toe in the Water at 11:37