Handprints in the Sand 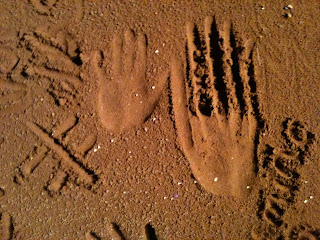 During the past week, I’ve been reminded of a response I made last year at Leading Edge.

(For those who are not in the know, Leading Edge is a Baptist Holiday week with a spiritual edge. Sadly, it has just been announced that it will not be happening this August, due to low numbers booking.)

At one of our meetings, we arrived to find a sort of shallow sand-pit down the centre of the hall. I forget who was speaking, but reference was made to the account in John 8, where some Pharisees and teachers of the law brought before Jesus a woman who had been caught in the act of adultery. What should happen to her, they wanted to know? To begin with, Jesus said nothing. He just wrote on the ground.

At the end of the meeting, we were asked what we would like to write in the sand: a response, if you like, to the questions and demands of ministry that confront us. This is a photograph of my response: an imprint of my hands, one of them dragged down through the sand, getting all the dirt under my fingernails. It was to express a willingness to get my hands dirty in serving God.

In the past few weeks, God has certainly taken me up on that promise! I can’t go into the details but suffice to say that I have had to deal with a number of people in desperate need. I’m not complaining about that; it’s been a privilege to serve, but I have done very little of the routine pastoral work that I ought to have done and would expected to have done.

I am reminded, as I have been so many times, of the words of Juliet Kilpin at a Baptist Ministers’ conference several years ago. She talked of the times when we experience all sorts of interruptions to the ministry we are meant to be doing. Then she said, ‘The interruptions are the ministry.’

And they are! The interruptions are the ministry – although I am hoping for a few less of them this week!